A Runaway Inequality activist, Tim Cates, sent along an article from his local shopping paper, the Ashland Sneak Preview. In the April 2018 issue, the publisher, Curtis Hayden writes about reading Les Leopold’s book Runaway Inequality. Mr. Hayden does a great job of laying out the problem with wealth and income inequality, and settles on the creation of a public bank in Oregon as a good and doable first step. He called Tim Cates, who had already investigated some with the Oregon Secretary of State’s office. There are hurdles to get past, but they’re working on it.

As Mr. Cates says in the article: “As much as I was heartened to walk in the March for Our Lives today in Medford, I was again reminded that we must unite about the inequality issue rather than operate from narrow, single-issue ‘silos.’ The super-wealthy see guns as an issue that divides the non-weallthy and they are more than willing to exploit and support that division so as to further their goal of rigging the system in their favor.”

Read the online version of the story here. 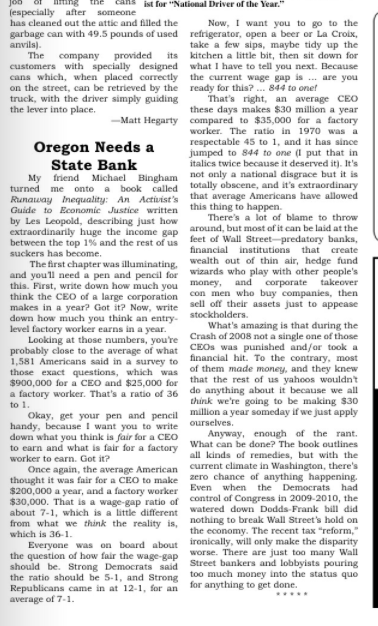