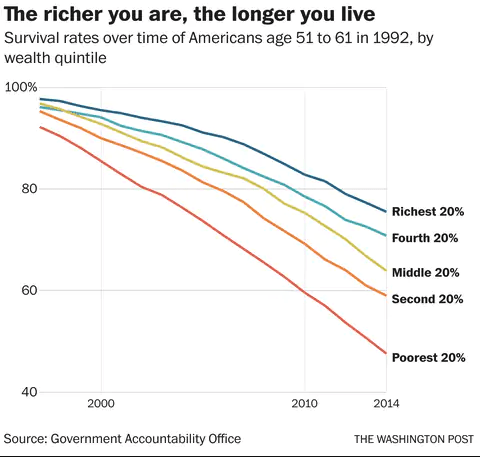 Each Sunday Tony Wikrent posts a list of links at Real Economics and Ian Welsh. Some are political, many lead to news about runaway inequality. This post borrows a few that seem to fit together very well.

The New York Times reported that inequality is getting worse, which for poor people means more sickness and an earlier death.

Peter Turchin, at Evonomics, discusses what it is that sometimes (like in the post World War II era) decreases inequality. Namely policy changes when disenchantment with inequality reaches a boiling point.

Bloomberg takes a look at the growing disenchantment with capitalism in the US and UK, with charts.

Chris Hedges demolishes the Business Roundtable’s efforts to rebrand their rapacious capitalism, which has led to the worst inequality since the 1920s, as benevolent leadership.

Pam and Russ Martens note that Bernie Sanders said the top three US billionaires (Gates, Bezos, Buffett) have more wealth than 160 million Americans, but he was using 2017 numbers. The inequality today is much worse.