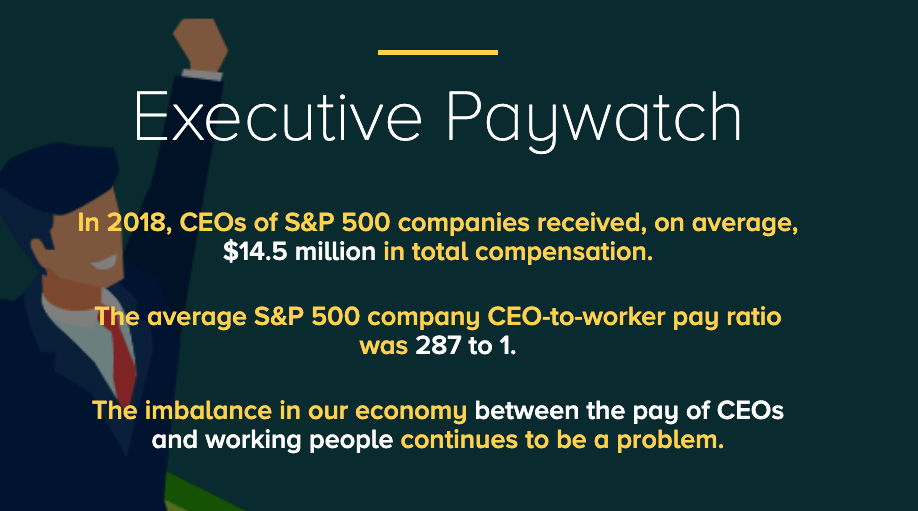 The AFL-CIO Paywatch program keeps an eye on the executive compensation figures public corporations are required to report thanks to the Dodd Frank Wall Street Reform and Consumer Protection Act of 2010. That’s information companies didn’t want to report, and a closer look shows why.

After the big Trump tax cut in 2017, the top 10 companies in stock buybacks last year spent $25,200,000,000 reacquiring their own stock, driving up stock prices. Since the majority of executive compensation comes from stock grants and option, the average CEO in this group made $30,800,000. Until 1981, the SEC considered stock buybacks stock manipulation, which was not allowed.

Arthur Peck, the Gap CEO, earned 3,566 times more than the Gap’s median worker. Median is the worker who is in the middle of the distribution curve, meaning there are as many workers making less as making more. The Gap’s median worker earned $5,831 last year. Mind the wage gap.

At the other end of the spectrum, Niraj Shah, CEO of home furnishings e-commerce site Wayfair, made just two times what the company’s median worker made (which was $42,694). Seems way fair.

Scroll back to top